Daveigh’s adventure with film begun, when she won the main character role as the voice in animation “Lilo & Stich” (2002). Later she would give her voice in other films, but her breakthrough role was Samantha Darko in movie “Donnie Darko” (2001) and its’ sequel.

She appeared also as haunting Samara Morgan in American version of horror “The Ring” (2002) for which she won MTV Movie Award for the best villain. Chase landed a role in controversial HBO series “Big Love” in which she played a teenager raised in polygamist family. She did not retire from acting, but has not appeared in any project since 2015. 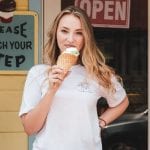